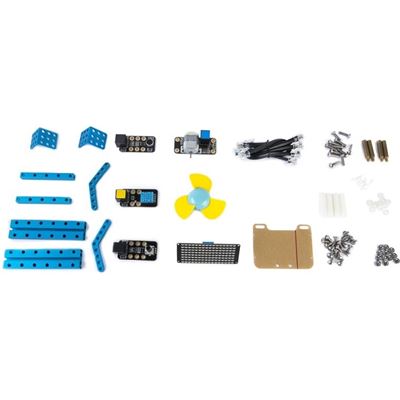 mBot add-on case 2: Sound control lamp
The lamp would be turned on in dark area when sound reach at certain value.

mBot add-on case 3: Weather station
It can measure temperature and humidity and show the value on the LED screen.

mBot add-on case 4: Knob Robot
It is a robot that can play number guessing game.

mBot Ranger add-on case 1:Roly-poly
The robot can return to vertical state after shaking. And it can do specific action and expression by programming.

mBot Ranger add-on case 2:Music Box
The music box would be switched on by controlling lights. When the music starts, the doll beginning to spin, and the LED lighting up.

Get in touch as we'll happily dig into this for you.

Be the first to write a review

View all Educational/STEAM Products from Makeblock

END_OF_DOCUMENT_TOKEN_TO_BE_REPLACED

If you're after a number of items let us know and we'll see what we can do.

We're here to help so let us know what you're after and we'll see what we can do.